Method A) Use Query Analyzer to open and run the file

Method B) Use the command line program to run the file osql.exe

You should see some output that looks like this: 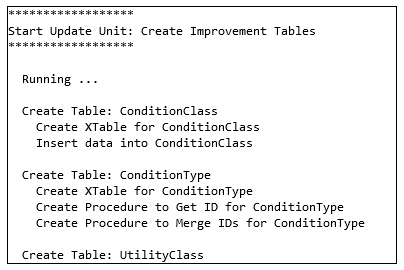 The last line of output should read:

3. Run the Script to Load any Database Modifications
Any additional changes will be in files marked with the release numbers. Run these files in order of their release. For example “1.0.2.sql.”

4. Run the Script to Load the County Table
Using the same setups as above, run the file insertCounties.sql to load the County tale. THis script could take up to 2 minutes to run.

5. Add SQL Server Logins for the User or Groups That Need Access
The setup in the program can assign users to the Database and Database Roles, but it does not create the Database Login. Using Enterprise Manager, grant Server access to the appropriate domain users who need it.

8. Set Database Connection Strings
Under Edit->Configuration the “System Configuration” tab adds the connection strings for the Database. The default string should be:

If you are only using a single database the “Read Only Connection” string can be left blank.

The Setup tables do not have all the checks to display friendly messages when invalid data are entered. If you try to enter invalid data you may see an error message that is not user-friendly. However, it does explain which data are invalid. You can use the Continue Application button, correct the problem, and then try to re-save.

10. The last steps to take are to set up an Access Group and to set up a Rule Set.

Was this article helpful?